The First Years of the School

The years at the pond

When the school was founded, in 1969, there were only four junior colleges in the capital area: Reykjavik Junior College (MR), Hamrahlid College (MH), the Commercial College of Iceland (VÍ) and the Technical College of Reykjavik. The youngest of these, MH, had started in 1966 due to an ever-increasing search for junior college education. Now there was need to launch a new junior college.

The launch of the school came about very suddenly. On August 22, 1969, the minister of education at that time, Dr. Gylfi Þ. Gíslason, published an advertisement about the launch of a new junior college, the Pond Grammar School. A few days later, October 1, 1969, the school started in the housing of Miðbæjarskóli, elementary school, at Fríkirkjuvegur. During its first year the school was a sort of a branch of MR and the principal of MR, Einar Magnússon, was given charge over the new child. One of the teachers at MR, Kristinn Kristmundsson, later principal of Laugarvatn Gymnasium (ML), oversaw the daily activities of the school. There were 30 teachers at the school during its first year, none of them tenured. 195 students began their studies there in 10 classes of first form. 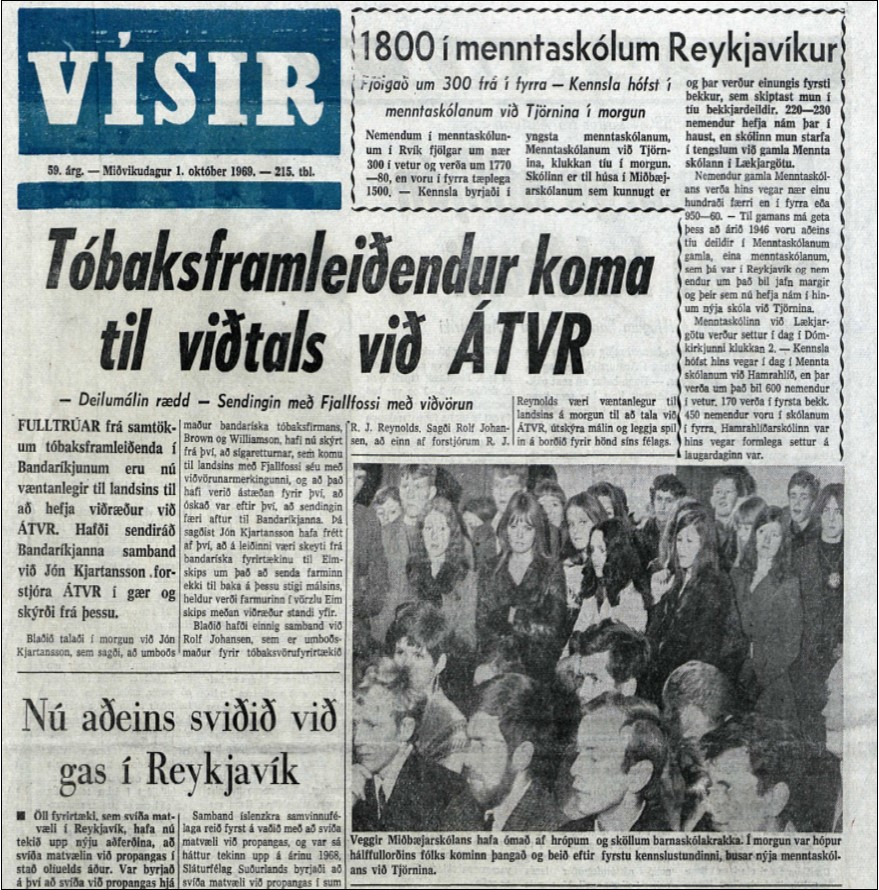 From the start of the school year 1970-1971 MT became an independent institution and a principal, Björn Bjarnason, was assigned to the school, a post he held until the spring of 1987. In 1970 a system of seminars was instigated in the school.The school year was divided up into two study periods, autumn and spring term.This division stayed until 2016 when a new three term system took over.

The housing accommodations of Miðbæjarskólinn were deemed unsuitable in many ways. Traffic noise, close quarters and cold often made life hard for both students and teachers. Despite this, school life bloomed right from the start. Positive atmosphere and student activity in the social life was unprecedented. A school paper, Andríki (nine issues, the academic year 1971-1972), was founded, a choir was founded in 1972 under the direction of one of the students of the school, Snorri Sigfús Birgisson, and the same year saw the production of the students’first play.

The number of students grew rapidly in the first few years. In the fall of 1971 it had reached 541 and the measures of doubling the setup of the school had to be installed. In 1972 authorities promised the school a new building and abuilding site was secured in the upper part of Laugardalur (just west of Glæsibær). The dream of a new school never became a reality, as is well known. Nevertheless, in 1973 matters had evolved so that a building committee at the school had been formed, an architect had been hired and IKR 2 million granted on the national budget for the preparation of the job.

On May 30, 1973, the first students graduated from the school. They were 159. The ceremony was held in Háskólabíó and has been that way most years since then.

In January 1974, a new thing developed. This was the so-called Sæluvika (Happy week). Ordinary teaching was put aside for one week and instead students worked on various projects of their own choosing, went on sightseeing tours, attended seminars, listened to lectures, and, in the evenings, took care of various activities. Sæluvika continued in similar form over the next two years and ideas from them were taken up in Góuvaka (the wake in Góa) 1978-80, Þorravaka (the wake in Þorri) 1981-91 and then akademía.

In 1974, it was decided to cancel the construction of the new school building. Instead the school was given place in Vogaskóli elementary school. A part of Vogaskóli was put to use in the fall. This situation of running the school in two separate locations was in place until spring 1976 but then the old Miðbæjarskóli was finitely bid goodbye and all activity moved to the present location. With the move all accommodation improved considerably both for students and teachers. For example, a library was founded, teachers got workrooms, students got the assembly room Skálholt (1977) and the canteen Kattholt (1978).

Eventhough the school was no longer at the Pond it kept its original name for a while. After much deliberation the minister of education at the time,Vilhjálmur Hjálmarson, took the lead, declared his verdict and announced at the end of the academic year 1977 that the school should from then on be called Menntaskólinn við Sund.